Distillation Tower: The world’s first refinery, in 1860, was in Pennsylvania, USA. Crude oil from distillation is, in fact, the physical separation of oil cuts, which is based on the difference in the boiling point of various hydrocarbons. The heavier the hydrocarbon is, the higher its boiling point, and the more hydrocarbon is lighter, the sooner the heat exchangers are passed, the heat dissipated to the tower after it has warmed, and in the pressures and temperatures, it comes out in two ways from the towers. The products are not net. The types of distillation towers are described below.

In the distillation tower with a captive tray, the number of trays in the tower’s path depends on the type of material transmissions and severity of separation. The diameter of the tower and the distance between the trays depend on the amount of liquid and gas that passes through a tray at a time. Each of the tower trays is a separation step. Because on these trays, the gas phase and the liquid are placed together, and the transfer of matter from the gas phase to the liquid phase or vice versa occurs in each of the trays. In order to maximize the efficiency of the transfer of material in each tray, the contact time between the two phases and their joint level must be as high as possible. 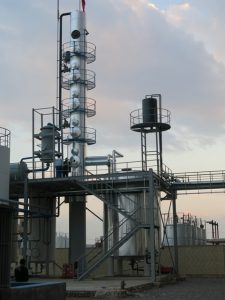 Different parts of the distillation tower with a warhead tray

Body and trays:  Body shape is usually cast from steel. Trays are usually made of cast iron. The tray spacing is usually selected according to the design conditions, purity and efficiency of the separation work. In most oil refineries, for distillation towers,  4ft is placed  between  50 –  18 centimeters. As the diameter of the tower increases, more spacing is considered for trays.

Hoods or caps:  The warheads are made of cast iron. The type of warheads is selected according to the type of distillation, and their number in each tray depends on the maximum speed of the passage of gas from the tray.

The height of the surface of the liquid on the tray must be such that the gases emitted from the slots of the caps can pass through it and the time of passing each bubble will be as high as possible. Due to the increased time of passing the bubble from the liquid, the time of gas and liquid contact increases, the efficiency of the trays rises.

In towers with lattice trays, the size of the ducts or grids should be chosen so that gas pressure can pass gas from the liquid phase at an appropriate speed. An important factor in the efficiency of these trays is the way they work in the tower. If the trays are not completely horizontal, the velocity of the fluid is not uniform at the tray level and the passage of gas is not the same across all channels.

Trap metal corrosion is also very important in these trays. Because of the corrosion, the diameter of the holes increases so that a large amount of steam will pass through the eaten channels at a low speed. And we know that if the velocity of the gas passes to a certain extent, the fluid will flow down the channel, the efficiency of the separation work will be reduced.

Distillation towers with trays of the valves of these trays are like lattice trays. With the difference that the movable hinges are located on each duct.

In the oil industry  , two types of trays are used:

Flexible:  As its name suggests, the valves can move between two very open or very closed positions.

Additional plates:  In this type of tray, there are two valves of one style that are placed on the bottom of the tray and the other is mounted on a tripod. When the steam is low, only the light lid will move. If the amount of steam is more than a certain amount, both valves move.

In the oil industry, various types of trays are used in distillation, separation and absorption towers. The features that are considered in selecting the type of tray for a given job are: vapor and liquid contact efficiency, tray capacity, vapor drop when tray tray, time remaining on tray, liquid specification, etc. Because in the industry, most hookah trays are used, to compare the characteristics of the trays, they are compared to the capillary trays.

These materials should be such that they do not have a mixed flush with the fluid in the tower.

The cementitious material should be tight enough to prevent breakage and deformation due to its use.

The way of placing cumulative materials

Cumulative materials are placed in a regular and irregular manner in the tower.

The advantages of this kind of filling are less pressure drop, which results in more fluid flow.

The benefits of this type of filling can be cited as low cost. But the drop in steam pressure will be high across the tower.

In Sinidar towers, it is possible to remove some of the solution in the form of side processes from the tower, but in the accumulated towers this can not be done. Repair works inside the Sinidar towers are easier. Cleaning up stacked towers will be very costly because they have to be emptied beforehand and then cleaned up.