Resin hardening consists of a standing cylinder tank made of steel plate, in which ion exchange resins are placed.

These resins convert hard water into soft water based on the replacement of hard water ions with sodium atoms. In the resin boiling cycle, water is introduced from the top and after leaving the resin bed, it leaves the bottom of the device.

In order to prevent resin losses in the resin floor, there are a number of nozzles covered on a silica bed.

Ion Replacement Technique in Resin Softeners is a stationary bed technology with a downstream flow because the resin does not move during the exchange of the ion and remains as a solid bed or column, and water that moves along the resin.

Above the column of resin, most of the water ions is absorbed and proceeds further, until all ions are received at the end. That is why the tanks of the hardening devices are made to form a column to prevent ions from escaping. That’s why they have a low diameter and a lot of defenses.

The lower pressure causes the suction to not work well.

In addition to the resin hardening agents, there is a salt tank, a dose of which is a mixture of water and salt crystals, and this salt is used to revitalize the resin.

Initially, steam boilers were supplied with distillation of water and distilled water, which was very costly. Subsequently, chemists realized that there was a great need to remove water ions in order to prevent any problems with steam systems.

Current ion exchange resins were first used in steam generators in the 1950s, and then gradually entered the production and distribution cycle around the world. Ion exchange resins are solid particles that can replace undesirable ions in solutions with the same amount of particles as desired from ions with similar electrical loads. 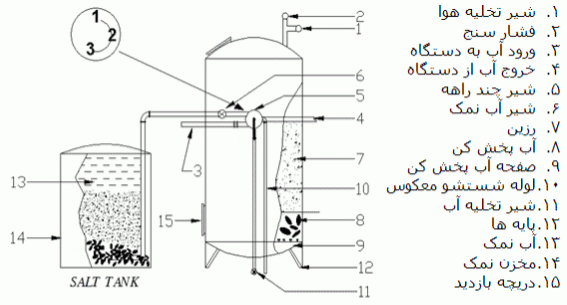 The weak anionic resins in the dynetics fall out of the strong cationic column (hydrogen cycle). These resins can remove highly isolated acids (sulfuric, hydrocracker and nitric) from the first exchanger.

Due to the importance of removing silica in power boilers, anionic exchange is always used. Strong anionic resins are capable of removing highly isolated and less highly separated acids.

The only anesthetic resin restoring is the caustic soda. Poor cationic resin: Poor cationic resins have higher yields than strong cationic resins, resulting in less resuscitation and therefore less waste. But these resins can not absorb all of the metals and, therefore, their use alone can not be achieved in the house’s rigidity.

Strong cationic resin in hardeners: Replace cationic resins with high calcium and magnesium, as well as other metals such as manganese and iron, and so on. The reaction path of the resins depends on their ability to mix with different ions in the water. This is called resin selection, which depends on many external factors, such as temperature and pressure. But basically, it depends on the nature and capacity of the ion, the type of resin and the concentration of water in the water.

Resin resin in sodium hydroxide is made with brine. This salt water, which has a concentration of 10% (equivalent to 100 g / l or 1000 PPM, causes the resin to rise to sodium, which results in a return reaction and resin recovery.

Recovery with Solo Whether automatic: In semi-automatic multi-way milk in our country, milk only works in three states.